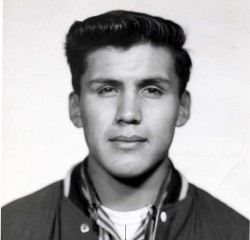 Leslie Elijah Tabobondung passed away peacefully with his family by his side, after a courageous battle with cancer, at the West Parry Sound Health Centre, on Thursday, March 24th, 2016. Age 78 years.

As expressions of sympathy, donations to Wasauksing First Nation for sports (Little NHL), Wasauksing United Church, or the West Parry Sound Health Centre would be appreciated.