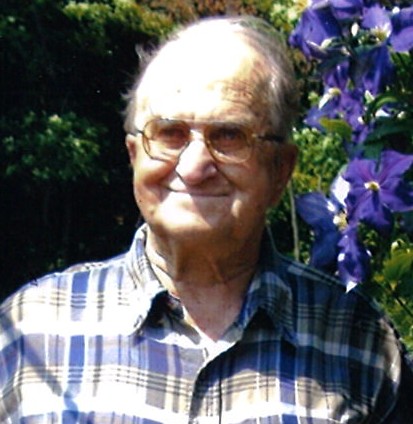 John R. Klose (former Councillor and Reeve of Christie Township, former employee of Tudhope Cartage) passed away peacefully, at Lakeland Long Term Care, with his family by his side, on Wednesday, November 4th, 2015, in his 97th year.

Beloved husband of June (Burnett) Klose for 70 years. Dear father of Sandra and her husband Victor; Donald and his wife Margaret; Larry and his wife Lois; Tim and his wife Kelly; and the late James, and Robert. Lovingly remembered by his many grandchildren, and great grandchildren. Son of the late Sarah and Charles Klose, pioneers of Christie Township. Dear brother of the late Colin, Christie Russell, Ernest, Charles, Muriel Antoine, and MacMillan. Dear brother in law of Bea Robinson. Fondly remembered by his nieces, nephews, other relatives, and friends.

The family would like to express their appreciation to everyone at Lakeland Long Term Care for their care of John.

A Service in Celebration of John’s Life will take place at the Orrville Community Centre, on Saturday, November 21st, at 2:00 P.M. Friends and family will be received prior to the Service from 1:00 – 2:00 P.M. Reception to follow.

As expressions of sympathy, donations to Seguin Pioneer United Church, or Maple Lake Club would be appreciated.