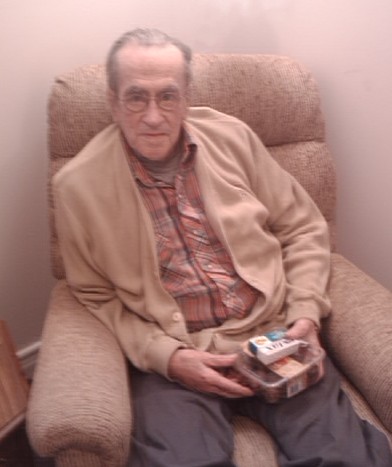 Reunited with his beloved wife, Patricia (nee: Swan), who predeceased him in 2006. Happily remembered by his sons John and Mike, his daughter-in-law Anne, and his grandson Lucas.

Born in Lacombe Alberta, Harvey moved to Parry Sound as a young boy. He began his career with the railroad as an assistant station agent in Terrace Bay with Canadian Pacific Railway, but changed companies in 1950 to apprentice as a Locomotive Engineer with Canadian National Railway. He remained with CN for 35 years until his retirement in 1985. Harvey held a special place in his heart for the railway and the men and women he became friends with. He loved telling stories of his many experiences “on the tracks”. From 1985 on, Harvey led a quiet retirement with his wife and best friend Patricia, in the Georgian Bay water town of Parry Sound that he loved ever since first arriving from the prairie as a young boy.

Harvey will be remembered for his independence, his humour and “gift of the gab”, his love of animals, and nostalgia for the railroad.

A private Celebration of Life will be held with family and close friends at a later date.

Special thanks to the homecare staff of ‘The Friends’ who helped Harvey live so independently at home; to the doctors, nurses and staff of the West Parry Sound Health Centre who made Harvey’s final stay so comfortable for him and for his family.

As expressions of sympathy, donations to the West Parry Sound Health Centre would be appreciated by the family.