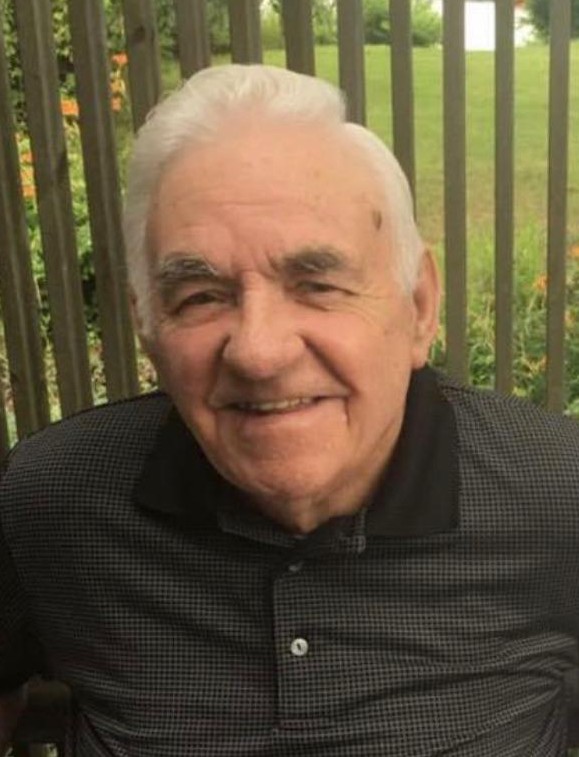 On behalf of our family and with heavy hearts we are announcing the passing of our father Clifford Allen Beagan who passed away January 7th, 2023, in his 91st year, at home surrounded by loved ones.

Dad accepted that it was his time to leave us and felt he lived a good life with 5 children,15 grandchildren, 2 great grandchildren and a great love for his Barbie Jane whom he was married to for almost 65 years.

Descending from a pioneer family, Dad was known as one of Parry Sound’s historians. Dad remembered everything and everyone. He could tell you who lived in each house, stories about their families and the Parry Sound community. His memory was incredible and we are extremely grateful for it. We have preserved those stories in his memoirs.

Dad was very fond of his Victory school days and he would recall stories with vivid detail. Memories of the day he was sent to the office for running across the desks, or when tempted to ring the fire bell, or when his leg was broken by a classmate’s toboggan. His Victory school friends were very special to him especially the blue eyed, curly blonde haired Margie Orr and Maybeth Coyne whom he shared incredible life long friendships with.

Clifford often chuckled when remembering his mischievous younger self, like the day he put oil on the railway tracks and watched the train slide, missing its stop.

His love of trains when he was young took him away from Parry Sound to a career with CP rail as a brakeman for 16 years where he survived a serious train wreck. Later on, his brother introduced him to his Barbie Jane whom he married, started a family, and then moved them to Windsor where he became a foreman at GM. He was an avid pilot and car enthusiast. He purchased The Creamery in 1969 and moved back to Parry Sound to raise his young family in the safety of his home town.

Never one to shy away from change or controversy, Dad was influential while on council for 9 years implementing waste recycling, the fire hall museum, and was the first business in Parry Sound to remove smoking from his establishment.

Dad was an amazing coach and manager in hockey and baseball creating bonds till the very end. He was involved in the Masonic Lodge, Shriners, Hockey Club, Curling Club, Hospital, Town Council, Victory School. Dad was one of the oldest graduating students of PSHS exceeding his teachers ages by decades. He received his diploma to a cheering crowd.

Family and friends were his greatest treasure in life. Relationships at a heartfelt level were what he was most grateful for and he was very clear to point this out in his 90th birthday speech.

Special thanks to Dr. Clarke and Kim Hutchins for going above and beyond.

As expressions of sympathy, donations to the West Parry Sound District Museum would be appreciated.

I am so very sorry to hear of the passing of Cliff. I know that him and my mom (Berniece Woodroffe Johnson) spent many years together at Victory. My thoughts and condolences are with you all. He was a great man!

Heartfelt sympathy to Barb and family. It was an honor to have known him. Will hold him fondly in my memories.

Our condolences to the Beagan family.

I will miss Cliff and his stories. He had the best memory I have ever come across. The ones about what he and my brother, Ted Carney, got up to were hilarious. Like when my Mum was in the hospital having me and they sat in our kitchen on Great North Rd eating peaches from the jars! What a great guy.

Dear Aunt Barb and cousins. Our condolences are with you with Uncle Cliff’s passing. He leaves a void that will be hard to fill. We will never forget his good will and sense of humour. He was the best boss and funniest hunting partner I ever had. R.I.P.

I John-Ryan and Douglas Carney (grandchildren) of Ted (Edwin) and Joan Carney extend our condolences to the family of Cliff. Cliff was a dear friend of my grandfather and an impressive historian when it came to Parry Sound and surrounding area along the Georgian Bay. My brother and I would like to attend the celebration of life in the spring to pay our respects. Again we would like send our thoughts and prayers to the family.

I am so sorry for your loss. Growing up in Parry Sound your dad was a household name in the community.

Words can’t express my sorrow for you and your family. Please accept my condolences.

I would argue, but for my brother Clifford, I would never have become an NHL referee which led to a 32-year multifaceted career in the game of hockey.
For Christmas, 1950, Cliff bought me my first pair of brand new “Rocket Richard” pattern skates that would cost, in the mid-20th century, a whopping $29.95; which would feed a family like mine for more than an entire week.
Cliff was not a hard man to read, and nothing was more obvious than the source of Cliff’s happiness. It was his wife Barb, and his children: Nancy, Dan, Susan, Jennifer and Trish, along with his several grandchildren.
Cliff was my “Best Man”, in more ways than at my wedding however, like all large stubborn Irish families, we had our disagreements, some unpleasant, but none worry of unforgiveness.
Rest in peace Bro, and may your memory be a blessing.
Happy to Meet; Sorry to Part; Happy to Meet Again.

My deepest condolences to the entire family. Cliff was an amazing person and touched so many lives. May his memory live on in others and may the happy memories bring some comfort.

Dear Barb and family. This was a great shock hearing about Cliff's death in Church this a.m. Our hearts go out to you. We will pray for you as we loved our Cliff - a great Victory School attendee and just a wonderful man. Ivan and Carol Ann Nicksy

I attended PSHS with Cliff as an adult and shared many fun filled moments with him in class. He knew everything about everything and we all loved to listen to him tell his stories. He will be missed greatly by those of us who had the privilege of calling him a friend. My deepest condolences to all of his family.

Heartfelt condolences to the family and much love and respect for the stories and memories Cliff shared and the passion he had for Parry Sound. He will be missed but never forgotten.

Condolences to the Beagan Family from another old Parry Sound family---the Richmonds. Victory School figured prominently in their lives ( Harry Tait !!) and the stories came back freely and often. Will miss his encyclopedic knowledge and memory. The Richmonds

My condolences Jennifer to you and your family. Thinking of you at this difficult time.

Barb and family,
So sorry to hear of the passing of Cliff. He and Jim sure had lots of tales to tell about Victory School.

So sorry to read of Cliff's passing. He served the Town well. He will be missed by many. I want you all to know that my thoughts are with you.

43 years ago when Killbear Park Mall first opened for business, Georgian Bay Creamery was our primary dairy supplier.
That’s how I met Cliff.
I continue to this day to have great memories of him.
On one occasion, we discovered, at the start of a busy summer weekend, that we were out of eggs.
Although The Creamery was closed, Cliff loaded up his car with our egg order and drove it out to Killbear.
The community has lost a fine person.

My condolences Dan to you and your family. Thinking of you at this difficult time.

I am so sorry to hear of Cliff's passing. He was such a warm person, always happy to see you and ready for a chat. He loved telling me about how chatty I was at the age of two when he was building his boat in our garage many many years ago. He will be much missed by so many but all these happy memories will live on in each of us.

Cliff was such a character! We served on Council together for 9 years & during that time he would routinely tell me (publicly) my facts were wrong & he didn’t believe me - but the next day I would receive an apology & a bouquet of flowers. It was hard not to like Cliff, & I miss the hugs we would exchange when we met by chance in the years following. Our kids attended school at the same time & Barb was always as reliably friendly as Cliff. I shall certainly miss him. A great guy!

I have so many memories with Cliff, beginning at my 1st job, at the Creamery. His warmth, curiosity and connection are not taken for granted. Truly a great human, and fantastic story teller. Cliff will truly be missed in this Town. Sincerest condolences to you Barb and the family

Our deepest condolences to Barb and the family. Cliff was a good man and will be missed by many. He really knew lots of the history of Parry Sound.

I was so fortunate to meet Cliff through my council years in Foley. We were newcomers to Parry Sound, 1968 , and he filled me in with a lot of Parry Sound History . Was a delight to meet him and Barb in town on our shopping trips on later years ! Our deepest condolences to the family.

My condolences to Cliff's family. Cliff was a great friend. I always enjoyed having a conversation with him about everything and anything related to Parry Sound. He was very perceptive and enjoyed sharing his thoughts and ideas. He had a social conscience and truly wanted the best for our community and the people who live here. His friendship is full of fond memories. Bless you Cliff... and thanks for the memories all the support you have given me over the years.
Ray Pavlove

Sending my condolences to Barb and your family. Your family were among the first that we met when we moved to Parry Sound. I have fond memories of our times on Miller St. and later of friendly chats on the fitness trail.

Such a nice man. Condolences to his family. He will be missed.

I am saddened by the passing of my first hockey coach. "Mr. Beagan" coached us as the Rotary Atoms from 1973 to 1975 seasons. We were zone finalists and Georgian Bay champs a couple of those years. Mr. Beagan also became a brother later in life when he participated in the initiation of my Masonic journey. Fraternally grateful, Rob