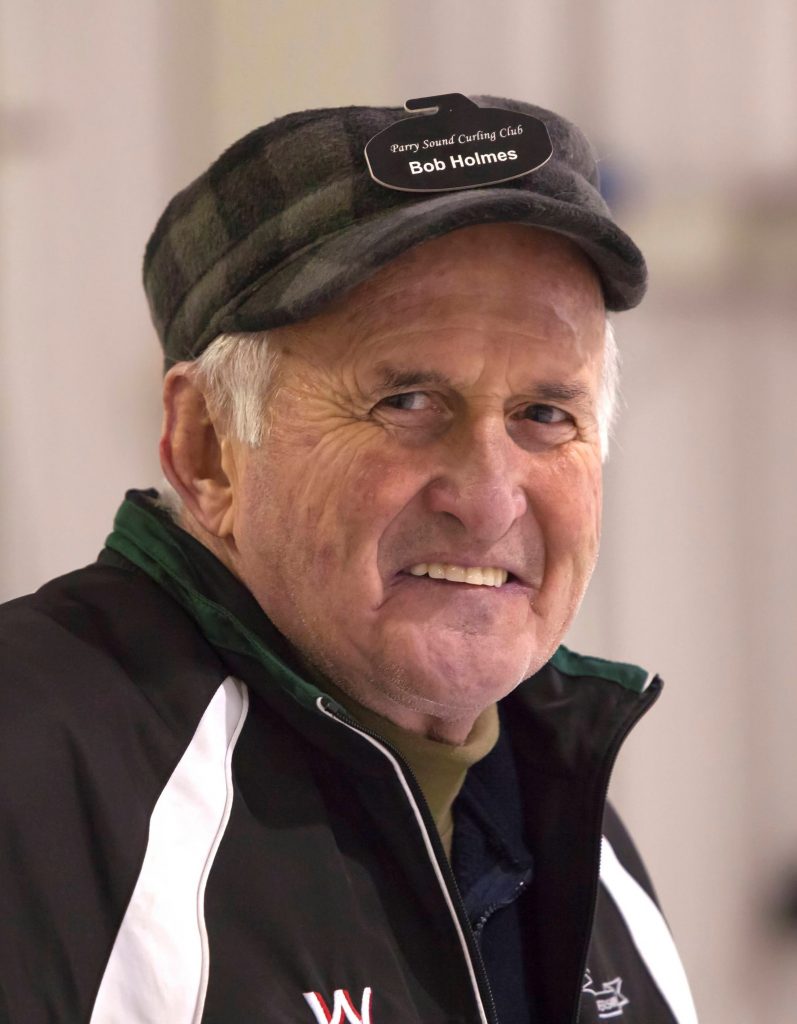 It is with deep sorrow that we announce the passing of our dear father, Robert Lloyd Holmes (Bob, Bobby, Homer) at the age of 78.

Beloved son of the late Dixon and Alice Holmes. Loving father of Dan (Judy), Scott (Nicole), and Kathy (Vince). Cherished grandfather of Taylor, Allison, Sarah, Bella, and Hunter. Dear brother of the late Brian Holmes. Bob was the loving husband of Barbara, and although they divorced, they maintained a respectful relationship which speaks to both of their character. Bob will be forever missed by his nephew Steven, his niece Jennifer, extended relatives and many friends.

Homer (as many of you knew him) had a great love and passion for curling, people in the marine industry, Georgian Bay/Parry Sound, but most of all he had tremendous love for his family, and he would do just about anything for them – he was always loyal to them through the good times and the bad. Bob was a competitive person who hated to lose; even in life, near the end of his road, he refused to accept loss. He didn’t have a mean bone in his body and would ‘give the shirt off his back’ in order to help someone who needed it. Bob embraced being the life of the party and absolutely loved to make people laugh. He always did his best to make sure that everyone was included in the fun, and fun was what he lived for! We are at peace knowing that he is in a better place, and take comfort knowing that he is now reunited with Dick, Alice, Brian, and many friends that have passed – there’s definitely some fun being had!

We would like to extend a sincere thank-you to the wonderful staff at Lakeland Long Term Care for the compassion and care that they have provided to our dad and our family. We would also like to thank our fathers’ friends who stuck by him through the recent years that were particularly difficult.

As was Bob’s wish, cremation has taken place.

As expressions of sympathy and in lieu of flowers, donations to the Salvation Army, or the charity of your choice would be greatly appreciated.

I'm sorry to read of Bob's passing. My prayers and well wishes to the Holmes family during this difficult time.

We have such great memories with Bob. Missed but not forgotten. He will live in our hearts always. Condolences to the whole family

Our wishes are with you in Bob's passing. We only knew Bob for eleven years and thoroughly enjoyed both curling with/against him AND his joie de vivre which he shared with all.

I've known Homer my whole life. In the early years the Holmes family lived on Church Street, two houses down from us. Even though they moved down to the Marina Bob, Brian Dick and Alice remained friends for life. I would like to extend our sincere condolences to Bob's family. May he RIP.

We are so very sorry that Bob has passed on. I have so many fond memories of Bob at the Curling Club. Because of him, I was able to transition to stick curling when my knees would no longer let me throw from the hack. He was always there for my student curlers too. He will be missed by all of us.
My condolences to Kathy, Scott, Steve and Jennifer, all of whom I had as students or junior curlers.
Nanci and Allan Beers

It is with sorrow that I read of Bob’s passing. There is no one but Bob that can tell a story that you will always picture him telling. I always knew of Bob but really had a. Nance to get to know him when he worked along with those of us at Gordon Bay Marine. He will be in heaven telling his stories and having everyone just rolling. May he Rest In Peace.

Homer was certainly a character. Not a mean bone in his soul, he just loved life and it showed. I was lucky to know him and share his stories about Parry Sound and our friends.

He always had a vision about trying to make things better for everyone, not just himself.

So many stories. So glad to have known him.

Bobby dropped off a new Fibreform with a 65 Evinrude to our 20'x20' cabin on Horseshoe Lake in the late 60's. He changed the McNabb boy's world. We loved him for it and we retell the story so often when we are together. Bob was a good man.

Anyone who knew Bob has a story to share, He was a gentleman, kind, caring, full of life always engaged and got great pleasure reminiscing, sharing the same the stories several times over the years. Having curled against him and with him many times over the past fifty-five years was a pleasure. He was completive and truly enjoyed the game on and off the ice.. In 1959 he represented PSHS (Ontario) in the Canadian JR Boys High School Curling Championships, finishing second in Canada. He was very proud of this achievement. He was good friend and was one of the first to step up and help. Our sincere condolences to Kathy, Scott, Danny, Steve, Jennifer and the rest of his family and friends. Rest my good friend.

My sincerest condolences to Bob's family. I love the obit. Whoever wrote it said everything that really described Bob as he lived. He will be sadly missed and forever Loved. Rest in Peace my friend.