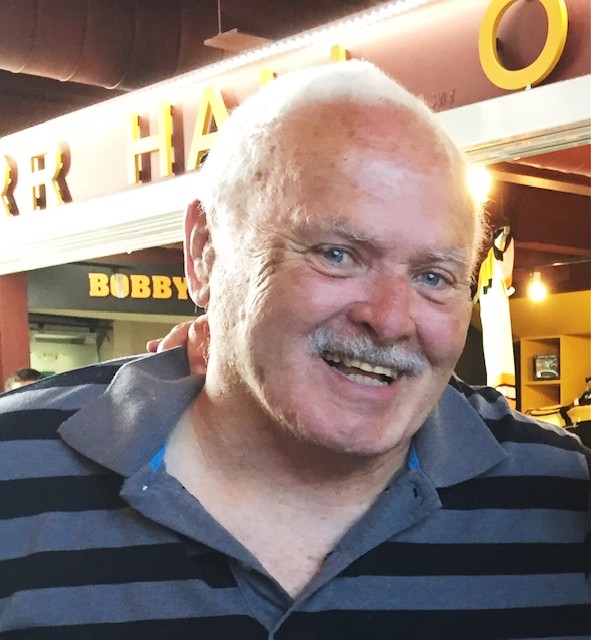 Whether you were out for a stroll, chasing after children, walking your dog, doing yard work or out for a drive, for almost 40 years a gentle sentry watched the comings and going’s on Riverdale Road. He could be on his porch or working in the yard, he always had a smile, friendly wave and some words for those who passed by.

His yard was a year round playground for the neighbourhood children and local animals alike. Filled with lilacs, cedars, shrubs and trees, it was a magical place with hiding places, tobogganing hills, and a lovely lone apple tree.

He was always up for a chat, a good joke, dog snuggles, or a visit…pull up a chair, he’d say. It is with a heavy heart that we announce this kind, generous soul did his last watch on October 14, 2021.

Beloved husband of the late Ellen. Terry was rarely without his trusty sidekick and most loved son, Mikey.

The family extends a huge thank you to the staff at the WPSHC for their excellent care of Terry. Your care and compassion did not go unnoticed.

At Terry’s request, there will be no service.

As expressions of sympathy, in lieu of flowers, donations to Community Living Parry Sound or Lakeland Long-Term Care would be appreciated.

That is beautifully worded and so true! Terry I’m going to miss our talks! Sending love and prayers to Mike.
Lisa, Sydney and Kirby

I had the pleasure of knowing Terry since 2015. He was a lovely and kind man, full of joy and generosity. He loved his family with all his being. He was a friend to all, always sparing the time to stop and chat. He will be missed by me, and I'm sure he will be missed by the community and this earth. Such a radiant person.

I just want to say we will miss you Terry

If I was to say Terry was a good man that would be a understatement!
His sense of community,what was right
can not be measured.
We as people must look within ourselves.
At times people within our lives
give a certain something that defines
what we can be .
Terry was such a man,if we can not
accept our role,look reflect let his son Mikey ,cast out by many lose
what his Father/Dad hoped for many
John

Tery was a friend for 49 years. I first knew him when I started work at Shaw-Almex in 1972. He will be missed.

I have known Terry for many years. He was a gentle giant, great husband and father. Rest in Peace Terry.

I just live up the street from Terry and would walk by his house. Often he was sitting on his porch or would come down his stairs and say hi to me and my dog. He was always so warm and caring and a strong, determined, advocate for his son Mikey. Whenever you saw Terry, Mikey was never too far behind. This community has lost a great man and volunteer. I will miss you Terry.

What a special person Terry was... the ultimate caregiver. I will always remember him & Mikey. I met Terry at The Friends Caregiver Support program/meetings, and wish I had met him earlier in life. He set such a great example for all of us. Rest in peace Terry. I hope I locate the orbit you are in one day!

We were fortunate to have Terry as our neighbour for over 40 years. Every neighborhood could use a person like him! We are having a mass said for him at St Peter's Church. After a previous stroke, Terry joked that the Lord wouldn't take him. But now the Lord has.

I have known Terry for alot of years. Since he worked at Hawkins Feed Mill. He always stopped and talked and he always had such a pleasant caring attitude. His dedication to his wife and certainly his son Mikey is an example that all should follow. A loss for sure to the community but most of all to Mikey. RIP

Terry was a dedicated husband and father , when I worked at Lakeland long-term care he and Mike would come in to either visit her or take her out for a while. He was more than a gentle giant he was a compassionate husband and father whom had a humorous side to him. Terry my friend you are now reunited with Ellen. Rest easy on heaven's front porch !

I met Terry while working with Mikey.
What a committed man to his family and his community he seemed. I can see by the other comments, that this was more than true. A great example for us all.
He knows Mikey is being well looked after...and that would make him feel at peace.

you will be sadly missed my friend...I had wonderful talks with Terry at the coffee shop at the hospital when he would wheel Ellen up with Michael for a pop and a treat...we would talk about our similar health problems and watch Mike enjoy his treat...I will miss our phone calls and I will miss you. You are with the angels now..........Jananne McWilliams

I have had the pleasure of having Terry as a dear friend for close to 70 years as we grew up on the same street. Later in life he would walk by my house when I was outside and we would have our usual pleasant long talks as he got his daily exercise. We would meet at Walmart's with Mike and have our usual talk. I know he had a good and kind heart and carried his responsibilities and love for Mike with a willing heart. I shall miss him with all my heart. I'm sure he has earned his angel wings already and he can watch over us from above. He certainly earned those wings. Rest in peace my dear friend.

I have known Terry for many years going back to our hockey playing days. He was a great soul, a dedicated father and husband.
My sincerest condolences to you Mikey
- David Brunton