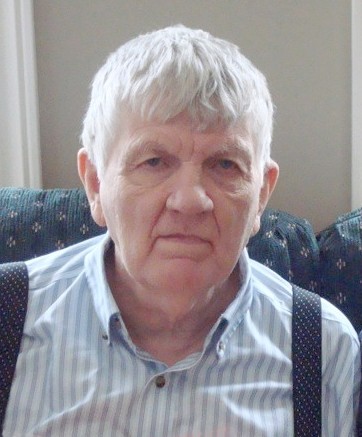 Peter Thomas Longueville Snow passed away peacefully, with family by his side, at the West Parry Sound Health Centre, on Tuesday, July 26th, 2022. Age 86 years.

Peter grew up in Parry Sound, spending the last few years at Community Living, Parry Sound. He had a love of CPR trains from an early age, especially Steam Engine trains – he enjoyed looking at train magazines, books and videos. Peter enjoyed socializing and was often at the centre of the Community Living activities. He also appreciated going for out-of-town drives and adventures.

As expressions of sympathy, donations to Community Living Parry Sound would be appreciated.

Peter I met you at Huronial Regional Centre many years ago when you decided to move back to Parry Sound at (Burritt St) . I worked at your home for 10 yrs and loved every minute of it .You talked to me about your friends at HRC and how much you missed some of them .And when my husband started to work at Burritt St (Bruce) you met him at the door and instantly called him Doug Woods and grabbed hands to shake .For 10 yrs Bruce was called Doug woods by you, and you always said that Doug woods was a very good friend at hrc .You always looked forward to rides in the blue ford truck and watching the trains .Thank you for all the memories and stories and lesson on trains .Rest easy Peter .We will always remember you.❤️❤️

It was my great pleasure and joy to support Peter for many years. He will be missed.
It was nice that you were by his side .
He always looked forward to your visits.

RIP Peter from an old Parry Sounder who remembers the boy from River street.

Peter was a gentle man who cared about his family and his house mates. He enjoyed a quiet environment. When things were loud in the house, he would often ask to go for a drive. We often drove back roads around Parry Sound but even more often we would take a coffee and sit at one of the train stations waiting for a train to go by. He would chat about his life and his Dad who he loved very much. He often planned trips for the two of us. His favourite trips were going to Toronto by train and staying in a hotel. He also liked going to my trailer. He enjoyed the outdoors. Listening to the birds and the spring peepers. He enjoyed cooking hotdogs on the fire and he really enjoyed eating s’mores. Peter has been a large part of my life for the past years. He will be missed.

Dorothy Snow and I were in the Primer class at Central School together and one day after school I went with her to Their house on Waubeek Street to see her brand new baby brother - Peter -- a long. long time ago.