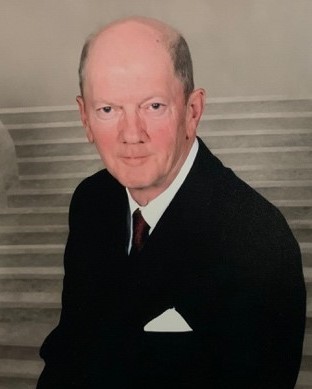 Loving husband, life mate, best friend, and bridge partner to Gail Payne. Loving son of the late Albert Ducklow and the late Ruth Simpson-Ducklow. Dear father of Joseph Ducklow (Melissa) and Douglas Ducklow. Special person to Mark Payne (Laurie). Dear brother of Mary Bell and Pat McDonald (Bill). Loving grandfather to Jacoby and Calix Ducklow and Grandpa John to Haydyn Payne. John will be sadly missed by his other relatives, friends, bridge players, curling partners, and the many people whom John served with throughout his thirty-year career with the OPP in Parry Sound.

John was an amazing Bridge Player, who became Parry Sound’s first “Life Master” and founded the first ACBL Duplicate Bridge Club in Parry Sound. John was an avid curler in his earlier days, skipping the OPP’s team. John enjoyed spending time with Gail on their many cruises around the world as well as numerous snowmobiling and boating adventures on Georgian Bay.

Resting at the Logan Funeral Home where family will receive visitors on Wednesday November 3, 2021 between 12:00-1:00pm.

A service in celebration of John’s life will take place in the Logan Memorial Chapel on Wednesday November 3rd at 1:00pm. Interment Hillcrest Cemetery.

Thank you to the staff of the WPSHC and Lakeland LTC for the exceptional care John received.

As expressions of sympathy, in lieu of flowers, donations to the West Parry Sound Health Centre Foundation, Lakeland Long Term Care, or a charity of your choice, would be appreciated by the family.

I was very sorry to hear of John's diagnosis and subsequent death. It's ironic, isn't it, that someone with such a quick wit and incisive mind would succumb to a disease that attacks the brain. I miss playing bridge against John - it was fun!
I have made a donation to Lakeland Long Term Care in his memory.

We send our deepest sympathy. John & Gail showed such patience and kindness to two novice bridge players. It was a privilege to get to know them.

Our Sincere Condolences to John’s Family and Gail.
Rolly and Gail Cascanette

Sorry to learn of John's passing. Lloyd and John worked together at the Parry Sound OPP in their early days. Sending special condolences to his extended family.

My deepest sympathy to Gail and John's family. Such a nice man and a pleasure to know.

I first got to know John as I observed the Friday night bridge game post-mortems that took place at our kitchen table. (John, Gail, Lib, Lloyd, Bruce, Angela, Iain.). I didn’t play then & was an eavesdropper.

When I finally was courageous enough to attempt bridge,John would occasionally ask me to be his partner. Despite our vastly different capabilities, he was always positive, supportive & made a stressful (for me) game a fun one. I never saw him angry or out of sorts & his memory for cards was unmatched!

A Parry Sound legend who will be much missed.

Gail so sad to read today about John. His bridge acumen was respected and we also thank you for your support to Barb Yarnold who is now with John at the bridge club in the universe!

My deepest sympathy to Gail and John's family. He was a wonderful man and it was a pleasure to have known him.

Gail, so sorry for your loss.

It was hard not to like John even though he would beat you up at the bridge table. My best bridge game ever was when I once partnered with John. Sorry to hear of his passing.

It was with deep sadness when we heard of John’s passing. I can remember my parents playing bridge with him, and as a very young adult… hehe … he was my saviour a couple of times. My father Rod was shocked at the young age and notably sad when I told him the news. I know my Mom Arlene would be the same. They both had a bridge respect and we all thought he was just a great man. Please accept our deepest condolences. My Dad had some funny bridge stories at dinner.