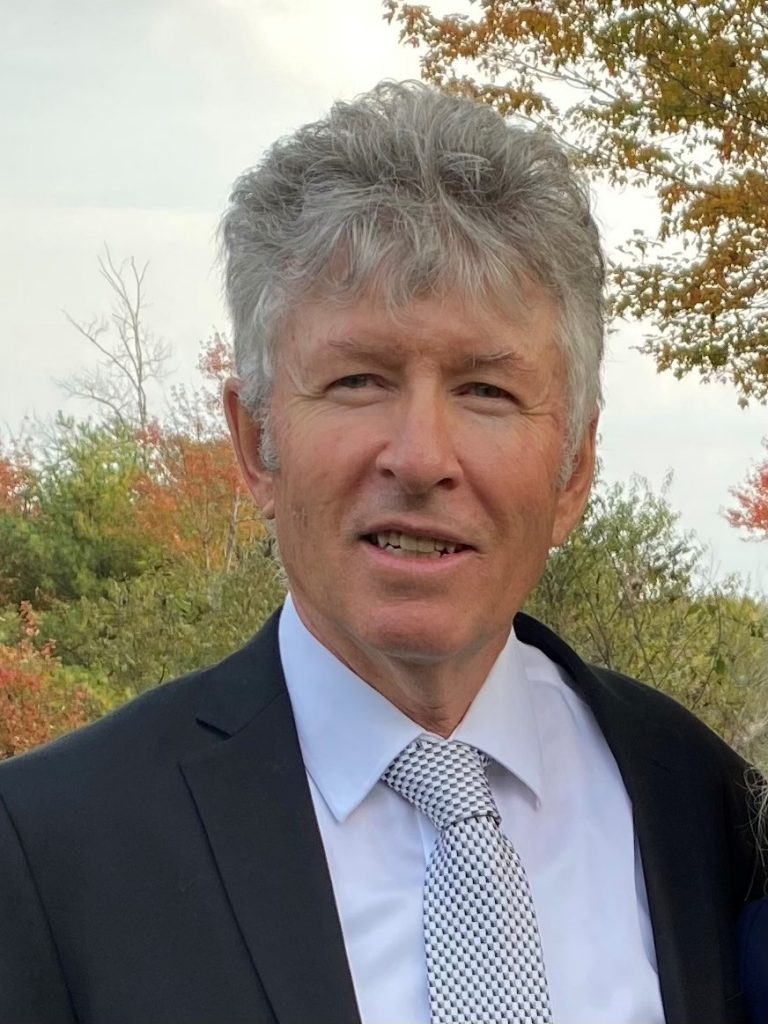 David James Hunter passed away peacefully, but far too soon, at the West Parry Sound Health Centre, with his family by his side, after a brief but courageous battle with cancer on May 5, 2022 at the age of 68. Adored, cherished, devoted, and most amazing loving husband and soulmate of Patricia (Pat) for almost thirty years. Beloved stepfather of Jesse Jacklin (Cassandra) and loving grandfather of Emma and William. Dear son-in-law of Jane and the late Peter Klynstra and brother-in-law of Agnes Vincent (Hector), Janet and the late Keith Smith, Judy Pearson (Phil). Dearly loved uncle of Sarah Manton (Chris) and Stephen Hunter (Ashley). Predeceased by his parents, Ralph and Verna Hunter and his brother, Edward (Ted) Hunter. Sadly missed by other relatives and friends.

Dave grew up in King City and moved to Parry Sound for his final year of high school. Their loss was our gain. He was an incredible athlete who loved all sports and played baseball and hockey as a young boy. As he got older though, it became apparent that baseball was his true passion. As a teenager in King City he was recruited to play fastball in two different Mens’ Leagues. His love of baseball continued when he moved to Parry Sound where he played in the Mens’ fastball League and his friends and teammates came to know him as “Catfish”. He was a skilled pitcher and many a batter feared heading to the plate to face his fastballs, while the fielders on the opposing team could do little to catch his many home run hits. He started his own Masonry Contracting business at the age of twenty and never looked back. He loved his work and was still laying blocks up until last November. He rarely stopped and from Spring to Fall was working every day, including most weekends. He had the gift of gab and loved meeting new people and could talk about anything. You can bet that if he built your foundation or repaired your block wall, it would not fall down as he always went above and beyond what was required. He’s probably looking down right now at any construction sites in progress thinking “they need to put some more rebar into that block wall or it needs more reinforcing”. Maybe he’ll build a castle out of blocks in heaven ready for when I come to join him.

A Celebration of Dave’s Life will take place in the Logan Memorial Chapel on Wednesday, May 11th, at 2:00 P.M.

As expressions of sympathy, donations to the West Parry Sound Health Centre Foundation would be appreciated.

To this day, I still tell the story about Cat ripping through the outfield in his truck, doing fishtails, in the middle of a game at the Britt Fastball Tourney. Always one for a grand entrance! Wherever you're goin', Cat, I'm sure you're gonna give 'em somethin' to talk about.

Pat: I was greatly saddened to hear of Dave's passing. I talked to him on his birthday back in February and had a great chat with him. My very deepest condolences to you and the rest of the family.

So sorry to hear about Dave's passing today. A real shocker to me as I was unaware of his health problem. Our condolences to the family and to Pat especially.

My condolences to Dave’s family at this sad and shocking news. We will miss our visits with him on Rankin lake and the many conversations.

Condolences to Pat and all the family on Dave's passing. Dave was a great guy, gone way too soon and he will be really missed by so many. He was a real institution in the greater Parry Sound area and beyond and especially on Haystead Bay on Rankin Lake. Any time you saw Dave you knew it would be a good chat, with his store of knowledge of the history of the area and his interest in everything from the Jays and Leafs to all manner of current events. And there are many, many home & cottage owners who have benefited from Dave's skill, expertise and commitment to doing a good job with all the foundations and other related masonry and construction projects he did. There will always be a part of Dave at our cottage with all the masonry work he did for us. He lived life to the full -his was a life very well lived. I am really going to miss seeing him at his garage when I drive in. RIP Dave.

We are so sad that Dave was taken too soon. We are lucky to have met him and bought the beautiful cottage he built at 10 Ralphs Walkway. He was a skilled tradesman and we appreciate his work. We will miss him but think of him often. Sincerest sympathies to your family.

My deepest condolences to all Dave family R I P Dave

So sorry to hear Pat. Dave always had a friendly smile and loved to chat. Our deepest condolences.

I spent a lot of time with (Catfish) Dave as a youngster playing baseball and attended lots of after parties with him . He was always the life of the party . My wife Lorna and I were shocked to hear the news of his passing . Condolences to the family.

Pat, my condolences. Dave was a great man and a good friend. He will missed.

Sending our sincere condolences to Dave's family. We will so miss our funny, quirky chats and laughing. He so loved to talk about the history of the lake and we loved hearing about it. Driving by his garage on Haystead Bay Road will never feel the same. He'll be missed.

A group of us from King City ( Gerry Beaupre, Mark Cruikshank… deceased… Rick Hayles and Kevin McCormick) play golf each fall and the tournament was named Elmers invitational after Dave’s uncle. Elmers Lane was a hot spot in King City back in the day. Dave had a treasure trove of Elmers stuff.
Dave showed at our tournament and gave us all ball caps with his company name and another set saying Elmers Invitational and chatted us up had lunch with us.
Thanks for always being so thoughtful and caring Dave and a conversationalist par none haha. The lads will miss you and our conversations.

Hope you and Mark Cruikshank get in a few rounds on some of the best courses and you hook up with your old pitching buddy from King Martin Cook.

Condolences to Dave’s family and friends.

So saddened to hear of David’s illness and passing. My Rankin Lake childhood pal, later into adulthood, my “Bro”. I will always cherish fun loving memories shared together. Our childhood hikes, picking blackberries, building the Tree Fort up back, stealing Bernice’s water lilies, evening walks (along the tracks) to Deyette’s. Sweet summer Memories of Dave walking thru the back kitchen door on a Sat Morning to say Hey, laughs on the dock, watching Dave motor out in his fishing boat...so many dear memories.
Pat and Family, Sending you my Deepest Condolences.

My condolences to the family. Dave always had a good story every time we talked will be missed by many .Rip my friend .

I was very surprised and saddened to hear that Dave had passed. He was a great guy and first met him playing in the men's fastball league, a few years ago. Nicknamed "Catfish" his wicked sinkerball was my nemesis.
My sincerest condolences Pat.

Our Deepest Condolence’s Pat and Family. Our thoughts and prayers are with you at this difficult time.

Very sorry to hear this news. Although I hadn't seen Dave for about 30 years, we stayed in touch and usually talked a couple times a year spending about half of our "talk time" laughing.
Sincerest sympathies to Pat & family.

In your lifetime you will make lots of friends but truly good friends are hard to find, difficult to leave and impossible to forget. Dave and I played baseball together - he was a pitcher and I was a catcher (he was by far the better athlete). We played for the Foley Stars who were at the bottom of an eight team league, but finished near the top, mostly as a result of Dave’s athletic ability. Dave was one, if not the best pitcher and home run hitter in the league. When playing the first place team in the league, who were all ex high school athletes stocking shelves at the A & P, Dave was nervous but came out flying and struck out 21 batters, zero runs scored against and he personally hit two home runs. It was the fastest game in the League’s history. He was a one man wrecking machine. Dave had single handedly annihilated the best team in the league AND THAT’S HOW THE CATFISH WAS BORN!

I have many Memories of David, as I grew up on Haystead Bay. The very first one would only be told to me as I was not yet born. It was the biggest winter storm of 1973. My Mom was in labour back on Haystead Bay and David had his Snowmobile waiting to take her to the end of the road. She hopped on and the rest is, as they say..history...
From that day, He was my God Father, and although we hadn't spoken in years, I will always hold so many Memories close to my heart.
Sending My Deepest Condolences to his Family at this very Sad and Difficult Time

May you Rest Easy David Xo

Very sorry to hear about Dave's passing. My condolences to his family. I havent seen Dave in some time but whenever I saw him he always took the time to chat and we would have a good laugh. Rest in peace.

Hugs to you Pat, and the rest of the family. Your hubby, was one of my best friends along with Joe McIsaac. When we played ball, Parry Island Women's fastball team, I would always see him and Joe standing off to the side watching us. As I got to know both of them one comment will always stick in my mind. "Wow, you girls play like men!' I just laughed, and told them, "I guess so, cause that's who we practice with." Happy journey my friend, say Hi to Joe for me. Sure gonna miss you...

So sorry to hear of Dave's passing he always had a smile on his face and very down to earth. RIP Dave.