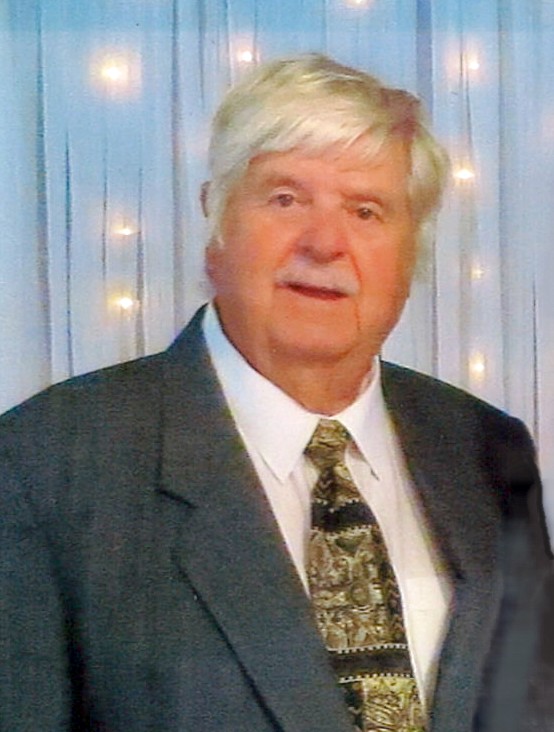 It is with great sadness we announce the passing of Robert H. Drummond. Bob passed away at Lakeland Long Term Care Friday, July 16, 2021 at the age of 85.

Survived by his devoted wife of 30 years, Brenda, and stepsons - Dan and Paul Bissonette, granddaughter Andrea Bissonette and her partner Bill McRobb, great grandchildren Kayne & Elizabeth and grandson John Bissonette. Lovingly remembered by many nieces and nephews and cousins.

Bob was born in Harrow, Middlesex, England, where he attended Lewis County School for boys, and was in the church choir as a young boy. He loved to sing. He shared a passion for sports of all kinds with his father, Henry (Harry) Drummond, until his dad died when he was ten years old. Bob never lost his enthusiasm for sports. Bob’s dad worked at the Post Office on Hide Road, Harrow, England, and instilled a passion for stamp collecting in Bob that was continued through his entire life.

He immigrated to Canada when he was 17. His sisters were already here, having married Canadian airmen, Joan - Peter Peters, and Daphney - Ray Holloway. Bob’s mother Doris followed after settling things in England.

Bob lived in Welland for several years with his first wife Marlene, and worked his way up in the banking industry. After a period in Ottawa, he was transferred to Parry Sound as the manager of the C.I.B.C. Years later... rather than leave Parry Sound to transfer to a higher position at a bank in another city, he chose to withdraw from the bank to pursue a different career, and in time became a partner at Lorne Tudhope Insurance Agency with Lorne Tudhope, Ken Brown, Ken Dobson and Brock Tudhope. He also enjoyed working there with Jeanne Roberts (MacDonald) and Kim Campbell as friends and colleagues.

Bob loved people, and this was apparent as he became involved in many community groups and committees. His efforts made a huge contribution to many people in health planning and promotion of programs and initiatives to improve the quality of life for so many, and are far too numerous to state here. His years spent with Peter Deane on the District Health Council in it’s founding years were a great source of pride and enjoyment. The friends he met on the Ontario College of Pharmacists, The Boards of the Parry Sound General Hospital and Belvedere Heights Home for the Aged were also high on his list.

Bob loved sports, either as a participant or as an observer. Tennis and badminton in his earlier years, but most people will remember him from the golf course. His trips to Myrtle Beach with the guys for golf holidays was a great source of fun and relaxation for him. His buddys, Joe, Ernie, Roger, Art, and Jack to name just a few, spent many an early morning T-ing-off here at our local course. He spent a considerable amount of time on the Executive and as President of the Parry Sound Golf and Country Club. The Hamilton Tiger Cats was his CFL team, and there were many years of fan rivalry between Bob and Ernie, who was a stalwart Toronto Argos fan. They had many a razzing and chuckles over that. Soccer and Rugby were also passions of his and our trip to South Africa in 1995 for the World Cup of Rugby was one of his favourites.

He had a compassionate love of animals and trees. One of the important aspects of all our travels was to check out the wildlife in their natural habitat as well as the zoos and aquariums. We have been members of the Toronto Zoo for many years, and often our anniversary gift to each other was to adopt an animal, which contributed to the expense of supporting the zoo programs. We have visited many zoos globally and always enjoyed our time spent there.

He was so happy when friends came to visit in these last few years, as it was difficult and at times impossible to go to visit where there was an accessibility issue. When friends came calling, he was really thrilled and each of you helped make his life more complete by sharing your time with him. Thank you all so very much.

Family would like to express our appreciation to staff of West Parry Sound Health Centre and Lakeland Long Term Care facility for their compassionate care. Prior to his facility care, he was provided with exceptional Home Care from the PSWs at The Friends. You will all be forever in our hearts.

At Bob’s request there will be no service. Cremation will take place with a private interment of his ashes at Sylvan Acres at a later time.

As expressions of sympathy, memorial donations may be made to: The Toronto Zoo, West Parry Sound Health Centre, Lakeland Long Term Care, Belvedere Heights or the charity of your choice.

The world lost a great man. Bob will always be remembered by me and many others as one of the kindest people around. He always has and will continue to hold a special place in my heart. A true family man who loved and cared for those who all those who came into his life. Each time I play euchre, I think, how would Bob play this one?
Bob, I hope there are many rounds of golf, hands of euchre and many good meals with friends waiting for you in heaven .
To the family I send lots of hugs and deepest sympathies, it’s been a difficult road the last few years, now he can rest peacefully
To Bob, “ Love from your favourite daughter in law!!!” You will be missed

My deepest sympathies to Bob’s family. I had the most pleasure working with Bob at Lorne Tudhope Insurance for many years. He wasn’t just a co-worker but also a friend. Hr was always so kind and made me laugh everyday. He was top on my list as a perfect and respectable human being. He will be missed by so many.
Rest easy Bob❤️

We bid a fond farewell to a wonderful & fine neighbour for just shy of 21 years...we always enjoyed our chats about sports, stamps & local goings on! Bob will be in our memories & we hope that family & friends find solace in the memories of time spent with Bob. May he Rest in Peace.
Connie & Ed Matthews

Condolences to Bob’s family. I remember Bob and Marlene from my own childhood days playing tennis and badminton in Parry Sound. A kind, jovial soul who would suddenly send a winner down the line. Loved watching him play doubles with Fabe Curry. Thank you Bob for all you did for Parry Sound.

Bob was my mentor and taught me everything I know. But more importantly he was my friend. We shared a lot of laughs and every day was an adventure. I will miss him. My condolences to his family you are in my thoughts and prayers. Cheers.

We were most saddened to read of Bob's passing. He had many friends because of his friendly nature. Whenever we dealt with him at Tudhopes it was always a good experience. We send our love to Brenda and his family.

Bob and I went on a road trip to Hilton Head, we played tennis and golf and ate lots of great food. Bob even drained a hole in one. Great trip and a wonderful person to be with.

I worked at CIBC when Bob was the manager and a better man you would never find. I also knew him because he was friends with my Uncle Ron Mayhew.
I am sure he will be missed by many
Holly

I think I can speak for my father, Jim and mom, Gladys in saying how much we lined Bob. A wonderful man. You’ll be missed.

About 45 years ago when Bob was a local banker, he was instrumental in fulfilling our entrepreneurial ambitions, that being becoming local business owners.
He was a terrific people person and we always enjoyed encountering him from time to time in subsequent years.

I had the great pleasure to know Bob and sit on the original Health Council with him. I also worked closely with Brenda at the Ambulance service.
My deepest sympathies to Brenda and family.

Brenda and family, I send you all deepest sympathy for your loss. When I think of some of my happy times in Parry Sound they include you and Bob and the fun parties we had at your home! May wonderful memories of good times live on for you. With deep sympathy
Phyllis Hollingsworth